The temple is adored by the Mangalasasanam hymn of Saint Tirumangai Azhwar.

Vaikunda Ekadasi in Tamil Margazhi covering December-January is grandly celebrated in the temple.

Karvaanam is one of the 108 Divyadesas of Perumal. Perumal appears majestically blessing the devotees with his right leg pressed on the ground with the left up.

The temple is adored by the Mangalasasanam hymn of Saint Tirumangai Azhwar.

Sri Ulagalanda Perumal Temple is one among the Divya desams found in Kanchipuram. We can see the head of Mahabali being stamped under the Thiruvadi of Sri Ulagalantha Perumal. As a request of Mahabali, Perumal showed His another form as “Aadhiseshan” in this same temple. This temple is very near to Sri Kamakshi temple. This Divyadesam also has 3 more Divya desams ( Thiruneeragam, Thirukaragam and Thirukarvanam) within itself.

This temple is dedicated to Sri Trivikrama – Ulagalanda Perumal, the fifth incarnation of Lord Vishnu. This temple tower is one of the tallest, measuring 192 feet in height. The Alwars Poigai Alvar, Bhoothathalvar & Peyalvar sang in praise of Lord Vishnu which formed the integral part of the Nalayira Divya Prabandham.

Vishnu took the form of Vamana, to subdue the demon king Mahabali; took on an enormous form and conquered the earth and the heavens and upon being offered Mahabali’s head as the resting point for his foot, banished him to the netherworld. Legend has it that Mrikandu Maharishi worshipped Vishnu here as Trivikrama.

The Moolavar is an imposing image of Ulagalanda Perumal or Trivikrama, with his foot raised, facing east. Taayaar here is known as Poonkoval Nachiyaar in her own shrine. The Utsavar here is Aayanaar or Kovalan (Gopalan). 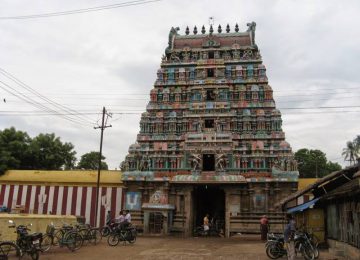 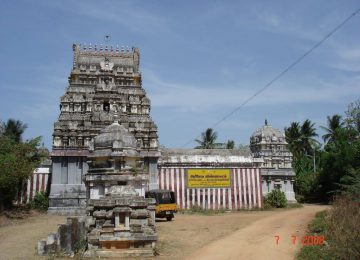