Deivanayagar temple 1000-2000 years old, Thiru devanar Thogai, Nagapattinam, Tamil Nadu. Sri Deivanayagar templeis located in the city of Thiru devanar Thogai, Nagapattinam, Tamil Nadu and is about 1000-2000 years old. India is famous for temples. Kings and devotees have built great temples all over the country. There are more than 3000 very old and popular temples to be visited by every Hindu. Temples for Lord Vishnu called as “108 Divya Desams” sung by “Azhvars”, 274 Shivan temples sung by “Nayanmars”, Six “Arupadai Murugan” temples, Vinayagar temples are mostly visited frequently.

The Moolavar of this Divyadesam is Sri Deiva Naayagan. He is giving his seva Nindra Thirukkolam facing his thirumugham towards west direction. Prathyaksham for Vashista Maharishi.

The Thayaar found in this sthalam is Kadal Magal Naachiyar. She has a separate sannadhi. The Utsavar Thaayar is Madhava Nayaki.

The Utsavar found in this sthalam is Madhava Perumal.

It’s been said that Lord Narayana married Godess Lakshmi devi who emerged out of the Thiruparkadal at this place. As the Deva’s came in a group (Thogai in tamil) this place is called Thiru devanar Thogai.

It is beleived that, after having dharsan of this perumal, unmarried persons get married and childloss couples got the boon of child birth.

This place was graced by the Celestical persons, the shadow of the Vimaanam falls within the range of the Vimaanam (temple tower) itself. The term Madhavan, Emperumaan are common for both Lord Shiva and Lord Vishnu. Henceforth to represent this unison, though the temple is a Vishnu temple, there is a burrial ground the favourite place of Lord Shiva in the backyard of this temple.

The Vimaanam of this temple consists of two stories and is of a Magnificant structure.

Among the Saptha rishis Vashista is considered as the top most person. He is the son of Lord Bhrama (ie) he was born by the mental thought of Lord Brahma. The term Vashister means “Best Rishi among all others”. 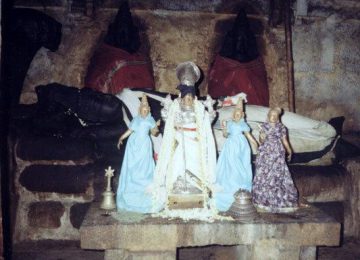