There are other Perumal temples around Tiruvali – Kurayalur Narasimhan, Mangaimadam Veera Narasimhan, Tirunagari Yoga Narasimhan and one more Lord Narasimha. The Vimana-tower above the Sanctum Sanctorum is known as Ashtakshara Vimana. Saint Tirumangai Azhwar had the Darshan of Lord Perumal in this place

This sacred land is revered next to Badarikashrama as Lord Perumal taught the Tirumantra to Azhwar. The place is also revered as Lakshmi Narasimha Kshetra as Lord Perumal graces here along with Mother Mahalakshmi. The devotee has the advantage of worshipping five Narasimha Kshetras in Tiruvali. Mother Mahalakshmi gave pressure to Perumal to grant darshan to Saint Tirumangai Azhwar. As planned, Mahalakshmi was born as daughter of Sage Poorna Mahrshi and had the hands of Perumal in wedding. When they were passing through Devarajapuram, Tirumangai Azhwar waylaid them. Perumal taught the Ashtakshara Mantra to Azhwar and granted darshan.

Perumal took the Narasimha Avtar to destroy demon Hiranya. His fury could not be softened by anyone. Devas and Rishis were afraid that Lord’s fury would destroy the whole universe and begged the help of Mother Mahalakshmi. She came and sat on Lord’s lap. Lord embraced (Aalinganam in Sanskrit) hence the place was named Aalingana Puram – Tiruvali. Tiru in Tamil means Mother Mahalakshmi.

Tirumangai Azhwar was a chieftain of this place. When his assets dried in the service of Lord, he began to rob people on the way to fund his services to Lord and thus became a Saint in the Vaishnavite order after the Upadesa of Lord. His Mangalasasanam hymns are noted for its poetic beauty combined with a spiritual flow touching the soul. Saint Kulasekhara Azhwar had sung the glory of Perumal in his songs. 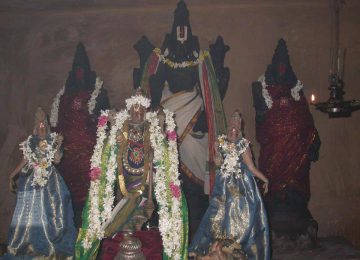 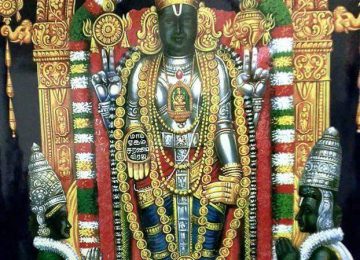