This is one of the sthalam found in Kanchipuram and is about 1 Km away from Sri Varadharajar temple.

When Thirumizhisai alwar was living in Kanchipuram, a very old lady (Daasi) used to clean his house daily and did this as a small favour for him.

On becoming happy on the favour she is doing daily to him, Alwar changed her from old lady to a beautiful woman. After this, wondering at the beauty, the king married the woman and she became the queen of the place. On hearing the secret of an old lady becoming a beautiful woman, he was in an eager mood to meet Thirumizhisai Alwar.

Kani Kannan, who was great follower of Thirumazhisai Alwar, helped and followed him and his teachings. The king called up Kani Kannan and asked that Thirumizhisai Alwar should come to his palace and should sing a poem on praising him. On hearing this, Kani Kannan said that all the poems and songs that comes from the mouth of Thirumizhisai Alwar belongs to Srivaikundanathan and it is impossible for him to come to the palace and sung a poem on praising the king.

On hearing this, he showed lots of gold ornaments, silver items, Diamonds etc to Kani Kannan and since he being very close to Thirumizhisai Alwar, at least he could sing a poem on praising him. But, Kani Kannan refused to do so and said he will not sing any song on praising the humans. The King got angry on hearing this and ordered him to get out from Kanchi at once.

Kani Kannan went to Thirumizhisai Alwar and explained all about that had happened in the palace and prepared to start getting out from Kanchipuram. On seeing this, Thirumizhisai Alwar also prepred to start from Kanchi leaving along with Kani Kannan. So, he too started along with him. While they were going, he sung a song on the Yadhothakari Perumal as Kani Kannan is leaving Kanchipuram, he is also going along with him and Alwar asks the Perumal to get up from his Aadhisheshan, which is the bed for him and roll it and wants him to quit from Kanchi.

The Perumal also got out from Kanchipuram following the Alwar and Kani Kannan. On hearing this, the king and all the people of Kanchi, begged Kani Kannan to return back to Kanchipuram.

And after this, Kani Kannan along with Thirumizhisai Alwar came back to Kanchipuram. When returning, Alwar sung a song asking that Kani Kannan has returned back to Kanchi and he want the Perumal to go and sleep in his Aadhiseshan in the temple. On hearing this, Sriman Narayanan comes back to Thiruvekka temple and gives his sayana kols seva. Since the Perumal obeyed the words of Thirumizhisai Alwar and did what he said, he is called as “Sonna Vannam Seitha Perumal”. Sonna vannam seitha means obeying and doing the same what was told to him. This is one of the purana story said about this sthalam.

Once in Brahma logam, there was an arguement that who is greater between Naa Magal (or) Saraswathi and Poo Magal (Sri Lakshmi). Brahma said that it is Poomagal – Lakshmi Thaayar who is found on the heart of Sri Vishnu is the greatest. Next, Saraswathi asked which river is the big river. But, unfortunately Brahma answered that the greatest river is River Ganga which is originating from the feet of Sri Vishnu is the greates. On hearing this, Saraswathi got angry and quit from the disappeared and went along the banks of river Ganga and started doing Tapas.
Naan mughan, Brahma wanted to do the great Ashwametha Yagam in Kanchipuram and wanted Saraswathi to be along with him. So, he sent his son Vashistan to make Saraswathi come back to him. But, Saraswathi refused to come along with him. After this, Brahma devan started the Yagam keeping Savithri and all of his wives with him.

On seeing this, the Asuraas (the Demon) wanted to destroy the Yagam and went to Saraswathi and made her angry by telling her what is happening. She got angry on Brahma devan and started as “Vegavathi” river along the south direction and flow across the place of the Yagam to destroy it . But, Sriman Narayanan wanted to stop Vegavadhi river and protect the Yagam from her. So, he stoped the river by lying across the river on Aadhiseshan. Because of this, this perumal is also named as “Vaga Sethu”.

This Vega Sethu then became Vegavanai and then finally named as “Vekkanai” and finally became “Vekka”.

In the Pushkarani of this temple only, Poigai Alwar was born.

This perumal is found in Sleeping posture from right side to left. This is also one of the speciality of this Shetram.

UtsavarMade with the combination of precious metal in which gold has a major part. 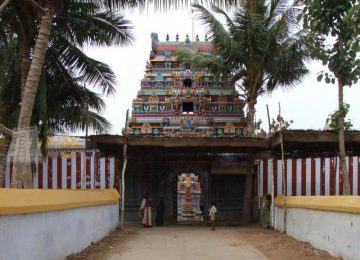 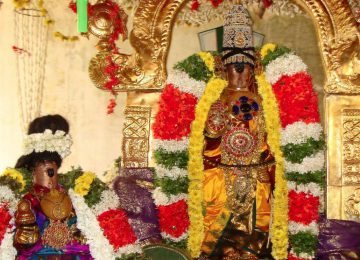