Being one among the celebrated 108 Divyadesas of Perumal, Mother Vanjulavalli graces the devotees in Her standing posture. Procession deity Mother appears with a parrot and a key bunch on Her hip showing that She is the Head of the Universe overseeing all administration.

The Vimana above the presiding deity is called Hema Vimana. Lord Chakarathazhwar with the Navagrahas below and paintings of Dasavathara (10 incarnations of Lord Vishnu) is blessing the devotees in the prakara. Sage Medhavi is nearby in worshipping form. The idols of the procession deities of all 108 Divyadesa temples are near the Garuda Bhagwan shrine. Special Tirumanjanam are performed here on Shravana star days each month.

Tirumangai Azhwar, formerly Neelan the chieftain spent all his wealth in the service of Lord Perumal. As he was not a Vaishnava, nobody recognized his bhakti and services. Sad Azhwar came to this place and begged Perumal to acknowledge him as His devotee. Pleased with Azhwar, Perumal placed the Vaishnava mudras-symbols of discus and conch on both his hands. Mudradanam is a ceremony of accepting one in the Vaishnava group by placing the symbols of Discuss and Conch in hands.

As Lord came to this place as an Acharya-teacher, He appears with two hands. The discus and the conch are on the reverse with the front Mudradanam style. As a token of his gratitude to Perumal, Tirumangai Azhwar sung over 100 verses praising the Lord and named Him Nambi. Nambi in Tamil means a person of flawless traits. This is the only Divyadesa where Perumal came as a Guru and offered Mudradanam to a devotee.

The temple is famous by Mother Goddess as the Sri Rangam temple with Mother Sri Andal. The sanctum sanctorum is so designed centering the glory of Mother. She is a little ahead of Perumal in a standing form. Worshipping Thayar-Mother in this form is considered to be very beneficial to the devotees. During processions too, Mother goes forward, Lord following Her. First abishek is dedicated to Her only. Procession Mother has a parrot in Her hand and key bunch on hip confirming Her predominance over the Lord.

Sri Garuda Bhagwan graces the devotees from His shrine holding 9 snakes. A six time puja(Aaru Kalam) with Modhaga- a pudding variety- is offered to Him as nivedhana. Generally only wooden or metal idols are used for procession deities. Here stone deities are used for the purpose. Four people bring the Lord out. This multiplies as 16, 32 finally. After the procession is over, He is taken back to the Sanctum Sanctorum in the same order.
It is said that two Garudas use to come during the midday puja to Him to accept the nivedhana. After their disappearance in course of time, a separate shrine was built for the two eagles. People use to light the Moksha (salvation) Deepa in this shrine.

Chola king Kochenganan is a staunch Lord Shiva devotee and occupies a place among the Nayanmars. He has built about 70 Shiva temples in his life. He had a desire to see Lord Perumal in His abode Vaikuntam. He prayed to Perumal. Lord Prumal granted darshan to the king with two hands and ordered him to build a temple for Him. The king built a temple with Shiva temple design with Yalis-a lion-like pillar, enabling the devotees to have darshan of Perumal from all sides. This is a Mada-type temple. Tirumangai Azhawar mentions this temple as Mani Mada Koil.

This is the first of the Panchakrishna Perumal sthalas-places. Also, this is one of the 12 Mukti sthalas ensuring salvation to devotees. The Vimana of the temples is like a Rajagopuram.

Sage Medhavi was a staunch Perumal-Vishnu devotee. He wanted to have Lord as his son-in-law. He performed penance sitting under the Vanjula tree to have Mother Mahalakshmi as his daughter. Mother appeared before the sage as a little pretty girl before him on the Utharam star day in Panguni (March-April). The sage named Her Vanjuladevi and brought Her up in his hermitage. Lord Mahavishnu came to earth in five forms as Sangarshanan, Pradyumnan, Anirudhan, Purushothaman and Vaasudevan to find Mahalakshmi and marry Her. Each searched for Mother in different directions.

Garuda Bhagwan who accompanied the Lord, spotted Mother in the Sage’s ashram and informed the Lord. Perumal expressed His desire to the sage to marry his daughter. The sage accepted Lord’s wish on one condition that his daughter would have all powers in all matters. Perumal agreed to the condition and had the hands of Mother.

Lord told Garuda that he should have His place here blessing the devotees as He had to be under the influence of wife. Thus Garuda Bhagwan became prominent in the temple. Named after Mother-Nachiar in Vaishnavite terms, the place came to be known as Nachiarkoil. 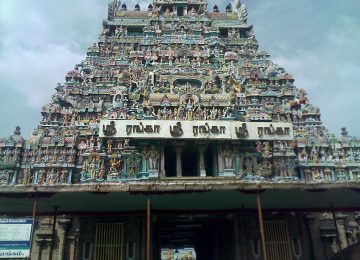 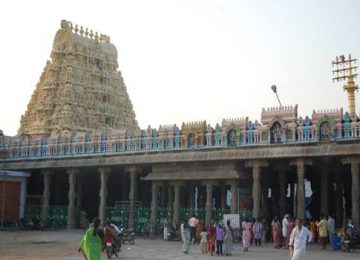