The temple is one of the 108 Divya Desas of Perumal. There is a vibration effect in the sanctum sanctorum which is said to exist from days. The Navagrahas the nine planets installed by Indira is on the wall under the tower facing west with respective zodiac signs. There is a small scar above the right eyebrow of the procession Lord.

One day, the priest of the temple gave the garland used in the Perumal puja to his sweet heart. It so happened quite unexpectedly the king came to the temple, but the priest had no puja garland to receive the king. He simply used the second hand garland he presented to his lover. The king noticed a hair and enquired the priest how it came there. The priest replied that it was the hair of Perumal. When demanded to show it, the priest assured the king to show it the next day. The king agreed but warned him of punishment if he failed.

The priest fell at the feet of Lord to protect him. When the king came the next day, Perumal gave him darshan with hair. Thus, he became Sowriraja Perumal. Sowri means hair. Devotees can see this Tirumudi (hair) darshan only during the procession on new moon days.

Lord is holding his Prayoga Chakra-discus the opposite way containing His 8 lettered mantra. Sri Garuda is nearby. Lord appears to devotees as Shiva in the morning, Brahmma in afternoon and Vishnu in the evening. This is the place where Perumal granted darshan to Vibishana the adopted brother of Lord Sri Rama. This event is celebrated on new moon days. Saints Nammazhwar, Tirumangai Azhwar, Kulasekhara Azhwar and Sri Andal had praised the Perumal of the temple in their mangala sasanam hymns.

Garuda was returning from the milk ocean (Parkadal in Tamil and Ksheera Samudra in Sanskrit) with nectar to free his mother. While flying over this temple, he proudly thought he was carrying the nectar which others cannot do. He lost his energy and fell on the sea. Realizing his folly, Garuda sat on a rock in the sea and performed penance on Lord Vishnu to pardon him. Lord not only pardoned Garuda and accepted him as His Vahan. This event is celebrated on the full moon day in Masi-February-March. Devotees welcome Perumal shouting Hello Mappillai (son-in-law).

The region was once under the rule of chieftain named Munayadharian, a staunch Vishnu devotee. He used to have his food only after worshipping Lord. He spent all his earnings in the service of Lord and became poor. He could not remit the taxes to his king and was arrested for default of payments. Lord appeared in king’s dream and ordered release of chieftain immediately. The king obeyed. When he returned home, his wife gave him pongal made of rice, a little dal and salt. Munayadharian worshipped Lord in his mind, offered the pongal as nivedhana and ate it then.

When the priest opened the doors of the temple the next day, he found pongal sticking to mouth of Perumal and informed the matter to king and others. They understood that Lord had accepted the pongal nivedhana submitted by Munayadharaian. Since that day, Pongal nivedhna is offered to Lord at the night puja known as a Munayadharian Pongal.

The sacred spring Nitya Pushkarini is very holy for the devotees. During the Uthrayana period covering six months from January-February to June-july, it is believed that all rivers join here for a dip to cleanse their own sins. People perform Pithru pujas (a ritual of the departed souls) on new moon day.

Indira the king of Devas worshipped Lord here and installed the Navagras with zodiac signs. This is facing west under the Rajagopuram.
There is no Sorgavasal here as in other Perumal temples opened on the Vaikunda Ekadasi day only, because this is considered a Sorga-Vaikunda on Earth. It is also the belief that sages are on the Utpalavadhaga vimana, performing penance of Lord Vishnu. The Vimana darshan is not possible in this temple as it is covered by walls on four sides. The temple also has the reputation of being one of the Pancha Krishna Sthala among the 108 Divya desas.

A scar is visible above the right brow of the procession deity. When foreigners demolished the walls of temples, a priest shouted how His hands failed to chase the invaders and threw a the plate on Lord in a rage.

The temple has its special significance attached with Ashtakshara Mahamantra of Lord Vishnu. While Perumal appears with His protecting hand – Abhaya Hastha, here He appears as if seeking alms, meaning that He is receiving our hardships for Himself to make the devotee happy. The Prayoga chakra in His hand appears to be ready to destroy evils. There is hair on the procession deity Sowriraja Perumal.

It is in this temple Lord Perumal taught the Ashtakshara Mantra to Saint Tirumangai Azhwar. Saint Kulasekhara Azhwar saw the Lord as Child Rama and experienced the pleasure of keeping Him on his lap and sung the Thalelo song-a melodious soft song to make the child sleep comfortably. Saint Nammalvar had sung 11 hymns on this temple. Perumal granted darshan to sage Garudathandaga in this place. Tirukannapuram is also praised as one among the five Krshnaranya Kshetras. Others areTirukanna Mangai, Tirukannangudi, Kapisthalam and Tirukoilur.

As Laddu in Tirupathi, fried pulse in Tirupurkuzhi, Sarkarai Pongal in Srirangam, Dosa and milk porridge-Pal Payasam in Tamil in Kumbakonam, this temple is noted for its special nivedhana Prasad Munayadharaian Pongal.

Of the 108 Divya Desas of Perumal, Srirangam is the west house, Tiruvengadam-Tirupathi the north, Tirumalirunjolai-Azhagar Koil the south Tirukannapuram the east.

Many many years ago, sages performed penance on Lord Vishnu relinquishing food and sleep and thus were physically reduced as thin as paddy stalks. Almost they lost human form. A king Uparisiravasu by name blessed with the Astakshara Mantra Upadesa from Lord himself was passing through this place with his men. As they were hungry, they began to cut the sages for food mistaking them as paddy stalks. Lord rushed to their rescue in the guise of a small boy and defeated the king and his men. As his army could not resist the boy, he finally applied the Astakshara Mantra to win over him. The Mantra simply surrendered at Boy’s feet. Realizing that the boy was none other than Lord Himself, the king fell at his feet and begged His pardon. Lord pardoned the king and appeared before him as Neelamega Perumal. The king built this temple with the help of Viswakarma the divine sculptor. Perumal agreed to stay here at the request of the king. 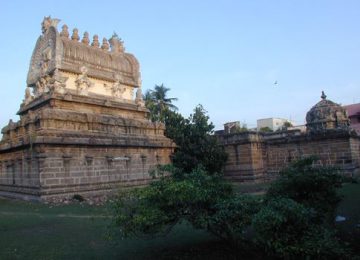