Lord Krishna is praised as Pandava Dhootha Perumal as He played envoy to Pandava brothers. He is mentioned as Dhoodha Hari in the epigraphs here. He also granted vision and darshan to blind king Dritharashtra in this place. Vaishnavite Acharya Arulala Perumal Emperumanar, also called Yajnamurthy visited here, held a debate with Sri Ramanuja and surrendered to him after 18 days. Acharya Manavala Mamunigal also had visited this place.

Rohini Devi worshipped Lord Krishna here and had the hands of Moon-Chandra in marriage here. Of the 27 star Devis, Moon wedded Rohini with Jnana Sakthi (wisdom powers) followed by Kruthika with Agni powers. He married other Devis later. It is said that Rohini is still worshipping Lord Krishna formlessly who granted wisdom powers to her.

During His avatar as Lord Krishna, He went to Duryodhana as the envoy of Pandavas to get at least five houses for them. Lord Krishna was the unconquerable strength for the Pandavas. Duryodhana plotted to humiliate and kill Lord Krishna during His visit. He made a deep pit, placed boxers underneath, covered the pit with fine carpets and placed a chair. When Krishna arrived at his palace and sat on the seat, as expected, he fell into the pit but took His vishwarupa, knocked down the boxers.

After many years of the end of the Kurukshetra war, king Janamejaya came to Sage Vaisampayana to hear the glory of the Bharatha story and Lord Krishna. The king asked the sage to suggest him a way to have the Vishwarupa darshan of the Lord as he appeared sitting on the pit made by Duryodhana. As advised by the sage, Janamejaya bathed in the sacred spring and performed penance here. Lord rewarded the king with His darshan in this place as the envoy of the Pandavas. 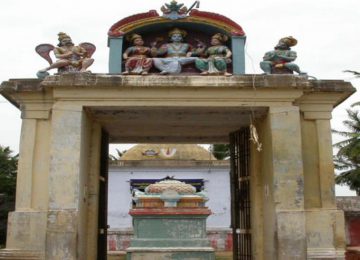 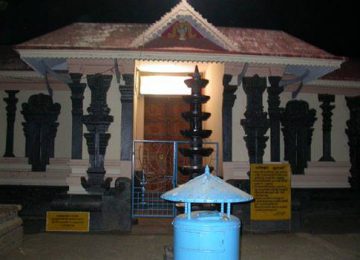