Sri Vadivazhagiya Nambi Perumal Temple,also named as ‘Thiru Anbil‘ is situated in Anbil village of Tiruchirappalli, Tamilnadu, dedicated to Lord Vishnu and also one of the 108 Divya Desam Temples.

The temple is believed to be built by the king Sundara Chola of the 8th century AD which is built in the Dravidian style.
As the king got enormous victory after worshipping the Lord Sri Vadivazhagiya Nambi Perumal here, he built the current structure celebrating his victory.And the temple is said to be mostly contributed by the Chola kings with lot of wealth.

Thiru Anbil temple is related to Lord Brahma, the creator of World, as Lord Sundararajan is believed to be appeared to Lord Brahma and sage Suthaba as a handsome young man.

The presiding deity of this temple is Lord Sundararaja Perumal, who is in reclining posture on the serpent Adisesha.
The other important deities of the temple are Goddess Sundaravalli, Goddess Sridevi, Goddess Bhoodevi, the twelve Azhwars, Lord Narasimha, Lord Hanuman, and Lord Venugopalar.

There is an idol of Goddess Andal located in this temple, who is in sitting posture, which is unique from other temples.
And it is believed that the unmarried person will get married soon by worshipping Goddess Andal at this temple.

This place is considered more sacred, where Lord Shiva and Lord Brahma got relieved from their sins after worshipping Lord Sri Vadivazhagiya Nambi Perumal in this temple.

Sri Vadivazhagiya Nambi Perumal is respected in Nalayira Divya Prabandham, the literature by Thirumalisai Azhwar in two hymns.
This temple is now maintained by the Hindu Religious and Endowment Board of the Government of Tamil Nadu. 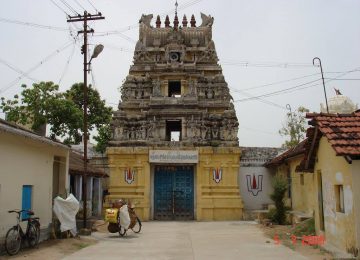