Sarangapani Temple is located in Kumbakonam, Tamil Nadu, India. It is one of the Divya Desams, the 108 temples of Vishnu revered in Nalayira Divya Prabandham by the 12 poet saints, or Alwars.

The temple is believed to be of significant antiquity with contributions at different times from Medieval Cholas, Vijayanagar Empire and Madurai Nayaks. The temple is enshrined within a huge granite wall and the complex contains all the shrines and the water bodies of the temple. The rajagopuram (the main gateway) has eleven tiers and has a height of 173 ft (53 m). The Potramarai tank, the temple tank, is located opposite to the western entrance of the temple.

Sarangapani is believed to have appeared for sage Hemarishi. The temple has six daily rituals at various times from 5:30 a.m. to 9 p.m., and twelve yearly festivals on its calendar. The temple chariot festival is the most prominent festival of the temple, celebrated during the Tamil month of Chittirai (March–April). The twin temple chariots are the third largest in Tamil Nadu, each weighing 300 t (660,000 lb).

As per Hindu legend, the Vaishnava deity, Sarangapani, an incarnation of Hindu god Vishnu, appeared for a sage Hema Rishi, who performed penance in the bank of Potramarai tank. The penance was performed to obtain Lakshmi, the consort of Vishnu, as his daughter. Vishnu was pleased by the penance and he wished the sage to get Lakshmi as his daughter. Lakshmi emerged from the Potramarai tank among thousand lotuses and was thus named Komalavalli (the one who emerged from lotus). Vishnu descended to earth as Aravamudhan in a chariot drawn by horses and elephants from his abode Vaikuntam. He stayed in the nearby Someswaran Temple to woo Lakshmi to marry him and the couple eventually got married. The name Sarangapani (“one who has the bow in his hand”) derives from the Sanskrit word Sarangam meaning bow of Vishnu and pani meaning hand.

Sarangapani is the largest Vishnu temple in Kumbakonam and has the tallest temple tower in the town. The temple is enshrined within a huge wall and the complex enshrines all the water bodies of the temple except the Potramarai tank. The rajagopuram (the main gateway) has eleven tiers and has a height of 173 ft (53 m). There are five other smaller gopurams in the temple.

By Train – Kumbakonam is well connected by express trains from Chennai.Tamilnadu has excellent road transport systems and one can easily get buses to all parts of Tamilnadu from Kumbakonam.

By Air – The nearest airport is Trichy. 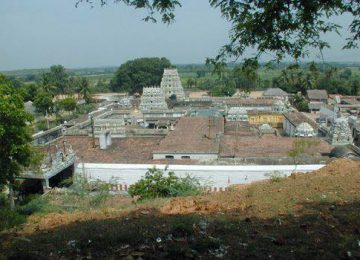 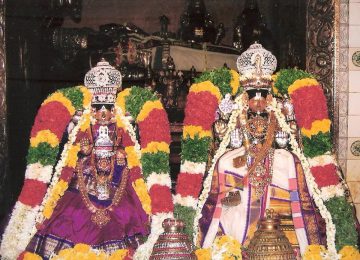