Mangalasasanam : Noted Vaishanvite Saint Tirumangai Azhwar had sung the praise of Lord Perarulalan blessing the devotees from the Tirunangoor temple.

The temple (sthalam) is on the Sirkali-Nagapattinam route. The devotee has to get down at Annan Koil stop. The temple is 3 km southward from this bus stop. Auto facility is available.

Near By Railway Station : Sirkali

Timings of the Temple:

The Grand Garuda sevai along with the 11 Perumals of Thirunaangur Thirupathi’s.IS DURING THE TAMIL MONTH OF THAI, NEXT DAY AFTER THAI AMAVASA

Sages Rudra and Dhrudanetra Muni had the gift of enjoying the darshan of Lord in this temple.

Those worshipping Lord here in all sincerity will be relieved of the poverty they are in with good jobs and progress financially, it is believed.

Aipasi Brahmmotsavam is celebrated in the temple in October-November on the Swati Star day, the birth star of Perumal. On the day following Thai Amavasya-new moon day in January-February, Perumal of this temple joins the 11 Garudaseva festival

Of the 108 Divya Desas, this is the temple for which Lord Himself raised the fund to build this temple. Lord blesses devotees facing east. Perumal is praised by many names as Semponnarangar, Herambar and Perarulalan.

The Vimana above the sanctum is known as Kanaka Vimanam. He is Arulalan in His Paramapatha kingdom. As He is also with us for ever pouring his grace,

A Brahmin, Kashyapa by name, living in Kancheepuram lost all his wealth and was reduced to a pauper. He came to this holy land, chanted the ‘Ohm Namo Narayanaya’ mantra 32 thousand times within three days surrendering at Lord’s feet.

All-Merciful Perumal blessed him with all riches. Before leaving to home once again visited this temple with tears of joy and prayed to Lord in a ecstacy. He returned to his native land with the wealth and performed charities and conducted sacrifices to please the Lord.

The old Brahmin and his family lived happily for long time and finally attained the Abode of Lord with their righteousness. Thus, the presiding deity of this temple got his name ‘Sempon Rangan

While returning to Ayodhya after killing Ravana in war, Lord Sri Rama stayed in the hermitage of Sage Dhrudanetra Muni. As suggested by the sage, to cleanse Him of the Brahmmahati dosha for killing Ravana, Lord Rama made a big Golden Cow, entered into it and performed penance for four days.

Then He donated the golden cow to a Brahmin on the fifth day. He sold the cow and used the proceeds to build this temple. As the temple was built with sale proceeds of the golden cow, the place came to be known as Sem Pon Sei Koil – Sempon-pure gold, koil-temple

Totally 11 forms of which 6 in standing posture, 4 in Sitting posture and finally 1 in sleeping posture.

Lord Shiva and Vishnu merging into a sing deity blesses us at all the eleven Thirunaangur Thirupathi’s.

The reason behind the formation of the total number of 11 is the Ashtaksha Mandiram “Om Namo Narayanaya” of 8 syllable reduces in to the “Om Narayanaya” mandiram of 6 syllable to combine with Lord Shivas Panchatsaram “Namashivaya” of 5 syllable to give a total of 11 syllables – 11 Thirunaangur thirupathi’s. 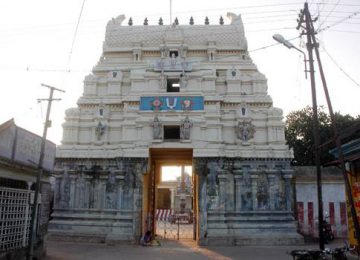 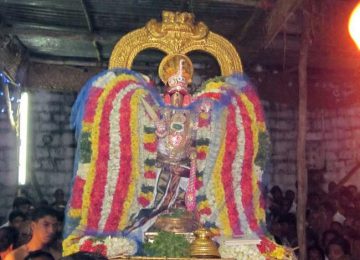