The Lord of this Divyadesa temple is praised in the Mangalasasanam hymn of Tirumangai Azhwar.

Chandra-Moon and Devas had worshipped Perumal in this temple.

Those facing adverse aspects of planet Moon are advised to come to this temple and worship Lord and Mother for relief.

In this Divyadesa temple, Perumal appears with crescent moon on His head as Lord Shiva facing east and in a standing form. Hence, the name of Perumal is Nanmadhia Perumal and Chandra Shaba Harar, one who released Chandra from his curse. The Vimana-tower above the sanctum sanctorum is known as Chandra Vimanam.

When Devas and the demons churned the milk ocean for nectar, Chandra appeared before Sri Mahalakshmi, hence enjoys the status as Her elder brother. He occupies the second place next to Sun in the planetary line. The other story is that he was born to Sage Athiri and his wife Anusuya, according to Puranas. Moon is handsome and is the disciple of Jupiter and well versed in scriptures. He conducted a yajna called Raja Suya which was attended a huge number of Rishis and Dhara wife of Jupiter. When they looked at each other in the event, they began to love each other. Shocked Deva Guru Jupiter reported this to Lord Vishnu and cursed his disciple with leprosy.

Meantime, a son was born to Moon and Dhara named Bhudha, also a planet called Mercury. As advised by Lord Vishnu, Moon returned Dhara to his Guru. Budha hated his father for his misdeed, performed severe penance and became a planet.

Moon committed the next mistake. He married the 27 daughters of Daksha promising him that he would treat each one with equal love. But he did not. He was very fond of Rohini alone and ignored others. The aggrieved daughters approached their father-Daksha and narrated their condition. Angry Daksha cursed that his handsome face will depreciate day by day. Full moon began to face the impact of the curse.

Chandra had to suffer a double curse. He surrendered at the feet of Lord Vishnu for relief. Perumal advised Chandra to visit Srirangam, Tiru Indalur and Thalaichanga Naanmadiyam, have a dip in the sacred springs there and perform penance on Him for relief. Chandra meticulously followed Lord’s advice and got the relief at this place-Thalaichanga Naanmadiyam. Lord granted darshan to Chandra and also wore him as an ornament on His head.

Thalaichangadu is 15 km from Sirkali on the Karaikal road. The temple is 2 km far from the bus stop.

Near By Railway Station :
Sirkali

Near By Airport :
Tiruchi and Chennai 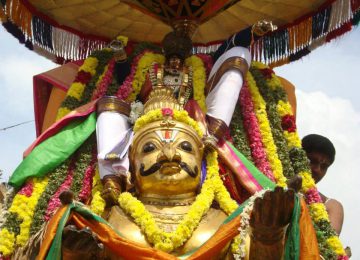 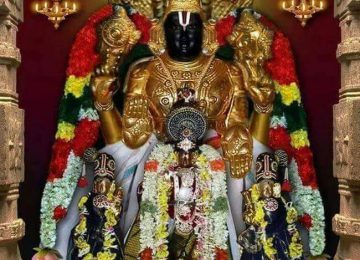