This is one of the 108 Divya Desas belonging to Lord Perumal blessing the devotees in reclining posture, His face at the south direction. Perumal granted Darshan to Sage Vyakra Pada – Sage with legs of a tiger-Puli Kaal Munivar in Tamil- as a Balaka-little boy. Hence the place is named Tiruchiru Puliyur.

Lord Krupasamudra Perumal graces the devotees from the sanctum sanctorum under the Nandiyavardhana Vimana. Sages Vyakrapada and Vyasa Bhagwan and the divine serpent Adisesha were granted darshan by Lord Perumal in the temple.

Of the 108 Divya Desa Tirupathis of Lord Perumal, only Sri Rangam and the Tiruchirupuliyur being the 11th in the line temple are facing south. Perumal graces in a full long form in Sri Rangam. He appears as a little boy reclining in this temple. Sages Vyakrapada and Patanjali, devotees of Lord Nataraja are in the very sanctum sanctorum with Perumal here. It is said that sage Vyakrapada prayed to Lord Nataraja (Shiva) for years seeking salvation. He was advised by Lord Shiva to go to this place and pray to Perumal to realize his wish. Lord Perumal granted salvation to the sage with a place in His sanctum itself.

It is noteworthy that Shiva devotee Sage Patanjali (Adisesah) and Vyakrapada are with Perumal in the sanctum. Sage Kanva also had darshan of Lord in this place. There is a separate temple for Adisesha also here. As sage Vyakarapada-Pulikkal Munivar in Tamil-worshipped here and as Perumal granted darshan as a Balaka-little boy, the place is named Tiruchirupuliyur.

There once existed a bitter enmity between Garuda and Adisesha. The latter came to this place and worshipped Lord to end the enmity between them. Lord granted darshan to the divine serpent on Masi full moon fortnight Ekadasi and took him as His bed –Anantha Sayanam. 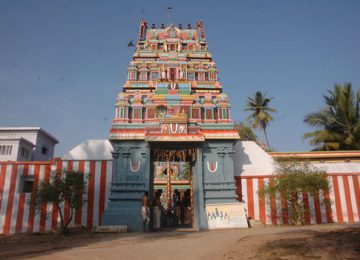 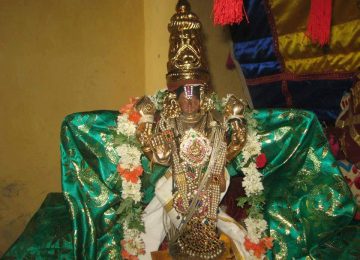