Lord, in His Bhujanga Sayana-reclining posture 108 is facing west. The Vimana above the sanctum is of Indira Vimana design. Lord Vazhikatti Vinanayaka (Guiding Vinayaka) graces the place. Upamanyu and Sage Parasara had the darshan of Lord Appakudathan here

Appam is a sweet preparation offered to Gods as nivedhana. Perumal got the name Appakudathan as He received the pot of Appam from king Upamanyu. Perumal appears embracing the pot by one hand. Perumal destroyed the pride of Indira, saved Sage Markandeya from fear of death and relieved king Upari Siravasu from sins and curses in this ancient place. It is also said that this temple (Kovil) came into being even before the Srirangam temple that followed next. Adi in Tamil means foundation or forerunner. Hence, the place is named Koviladi, it is explained by scriptures.

This is the temple from where Saint Periazhwar left for Lord’s Abode after singing his last Mangalasasanam. Hence, the belief is that one worshipping Perumal here is sure to reach Vaikunta. Mother and Lord are facing each other. Tirumangai Azhwar praised Perumal in his hymns. Lord Appakudathan followed Azhwar to Tiruvellarai where too he sang his praise again.

Koviladi-Appala Rangam is one among the Pancha Ranga sthala occupies the second place. Other four are Adhirangam in Sriranga Pattinam in Mysore, Madhya Rangam in Sri Rangam, Chaturtha Rangam in Kumbakonam and Pancha Rangam in Indalur-Mayiladuthurai, It may be noted that Srirangam comes third after Koviladi.

King Upamanyu lost his powers due to the curse of Sage Durvasa. When begged for pardon and relief, the sage said that the king should feed one lakh people in this place, then known as Palasavanam and he would be relieved of the curse. The king built a palace nearby and commenced the feeding. One day, Lord Sriman Narayanan-Perumal came there in the guise of an aged Brahmin. He was served food. To test the determination of the king, Lord consumed the entire quantity of food prepared for the day. King politely asked the Brahmin if He wanted anything more. The Brahmin replied He wanted one pot of Appam. Sooner He received Appam pot from the king, his curse vanished, says the Sthala Purana 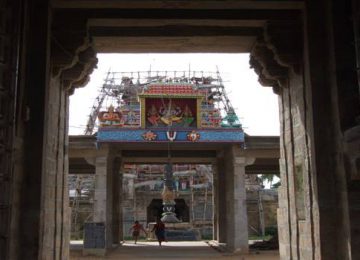 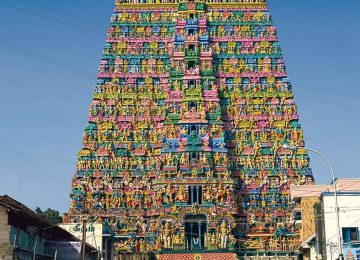